Robert’s idea of adventure for yesterday was to walk the Queensboro Bridge (Ed Koch Bridge or 59th Street Bridge) from Manhattan to Queens. This bridge passes over Roosevelt Island, and we go past it everyday on the tram. Robert asked me many times if we can walk on it to Queens, so he was very excited when we made our way toward the pedestrian ramp. It was perhaps the first acceptable warm day after a long winter with unseasonable snow.

After that long walk we continued our trek to Steinway in Astoria where we had a late lunch at an Arabic restaurant. I do not often crave Arabic food, but last Sunday we were with friends at the same place and I had a taste of their Kushari, an Egyptian dish with brown lentil, rice, macaroni and lots of crispy-fried onion. 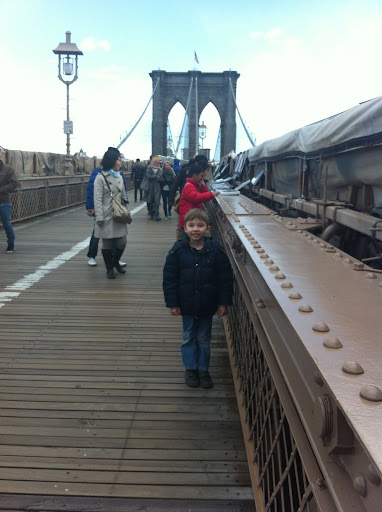 Today we had another adventure planned, again at my son’s suggestion, walking to Brooklyn via the Brooklyn Bridge. Compared to the functional and utilitarian Queensboro Bridge, this one is considered the tourist walk. The Pedestrian Ramp on Manhattan side is surrounded with every manner of stand and refreshment seller – They were selling Belgian waffles, New York pretzels, Juice, gyro, trinkets and fridge magnets and various artwork. Robert and I had the sweet and messy waffles just before embarking on our walk. 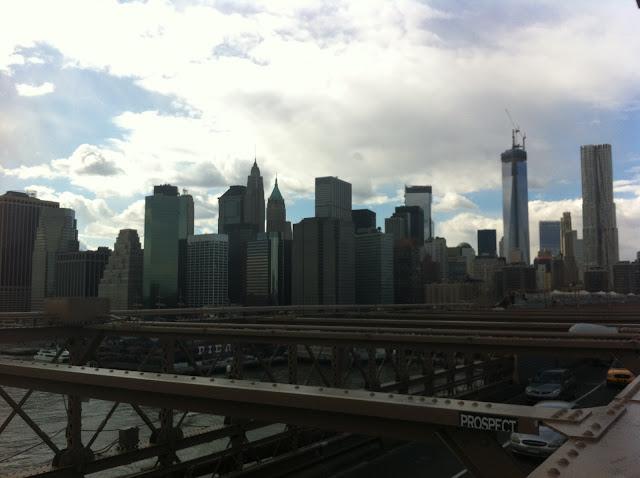 While Queensboro bridge had an equal number of walkers and cyclists, this one was crowded with walkers, mostly tourists. The bridge itself is a great architectural achievement, considering it was built in 1883. I am not sure what the walk would be like in normal conditions but at this time the view was obstructed in most part by sheet metal, and it looked like several parts of the bridge were draped or screened for maintenance. There were several views or vantage points where we took pictures, getting crowded with the many visitors. Along the walk there are benches and more stands selling trinkets and snacks. One of the most popular stands was an Indian guy carving perfect mango roses on wooden sticks. When I walked past his stand, a Japanese tourist had just bought one of his edible artworks, and was busy pointing her gigantic camera at it, for a closeup.

I had planned this time to go to a South African restaurant in Fort Green in Brooklyn, but the combination of the rich treat, the time, and the chilly weather, made me abandon this plan. Instead we spent some time at a Brooklyn playground.

Because of the less than perfect conditions on the Brooklyn Bridge I suggested that we walk back to Manhattan via the Manhattan Bridge. Robert was extremely enthusiastic. This bridge had interesting sights, a view of the Brooklyn Bridge, and connected with Manhattan at Chinatown. We had interesting views (Interviews – as Robert called them) of Chinatown. In terms of accessible view of the outside, this bridge gave a better experience than the Brooklyn Bridge in its current condition. The main drawback, however, is that the walking route is right beside a busy train route, four tracks are used for the B D Q and N trains in and out of Brooklyn, so perhaps it is better to walk here with earplugs.

In all our excursion on bridges we noted that instead of graffiti, people put locks with special messages, and names usually accompanied by a date. I would assume that these locks would get cut out regularly, but we saw some that looked quite old. There was even a bright red one with the date 05-12-13, a date that hasn’t arrived yet (even if you read it the American way).