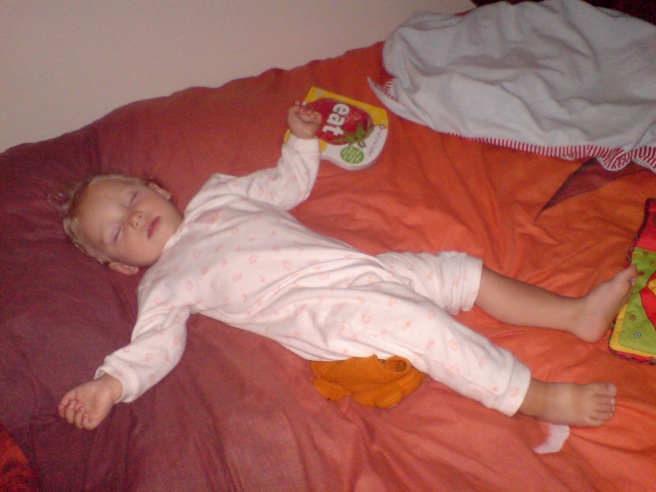 It is this time of night again when all is quiet except for the mosquitoes buzzing around my head. I feel a sense of peace and accomplishment today; little one is sleeping, the dishes are done, the toys are picked up from the floor, with all bits and pieces accounted for, and I have fixed one of Robert’s toys – the stacking rings which he destroyed recently. I still have a stack of books that need urgent care and attention after a close encounter with toddler terror; it is hard to catch up.  However it is nice to know that I am ending the day a tiny bit ahead, who knows what setback tomorrow will bring.

I was at work yesterday and I handed in my sick leave, and had a generous helping of humble pie with management in the ivory tower. I saw with my own eyes the form where I filled in my part time option incorrectly; pretty stupid eh? The guy I called the blond cretin was on duty travel so at least I was spared his gloating. I really haven’t changed my opinion about the planning side of our office.  Even in the five minutes I spent there waiting for the person in charge to show up, I was acutely aware of the shallow intellect and inefficiency.. life is a never ending tea break up there,  while below deck, we strain and slave away so that the ship stays afloat, so unfair really. But staying with ther here and now, I have blown my chance to show superiority over the incompetents of the ivory tower; I was just as bad, I am even worse than them because I assigned myself, not somebody else, with a wrong option.

Today I had the day off, and Robert and I set out for some errands. We walked as far as Moullie Point, where I got some paperwork from Robert’s doctor and got to the police station where I signed a proof of address and inquired half-heartedly about the wallet that I really lost two months ago. On the way back I went to the library and got myself a replacement for the library card. Robert was asleep so I spent some pleasant time browsing in the library.  Membership to the library is free to South African citizens and permanent residence, which is pretty good, but the quality and the age of the books is not top notch for lack of funding, I would actually prefer to pay a membership fee if it means access to better and more varied books. The Sea Point library has a corner for kids and there is a children’s librarian who has a reading program every Wednesday and I am hoping to take Robert there next week.

We walked quite long today, but it was a sunny and warm day; a perfect day in Cape Town and a great day to be South African. We bumped into a friend and may people stopped to talk with Robert, and he had such a ready smile for everyone. This was such a contrast to my experience in Europe, but I guess it is easy to be friendly when the sun is shining and everyone is in a holiday mood.

Before we got home I also managed to do some shopping, and filled my backback with fruit and vegetables.  Last week I bought some peaches and nectarines and they were both really tastelss, so I almost skipped the nectarines this time, but I am glad I didn’t; they turned out fabulous.  Robert got his first taste (and sticky feel) of plums; I let him handle them and mess to his heart’s content.. Later he ate fruit yoghurt and then sausage, and contiued to sample with me everything I put on the table.

I am always happy when Robert eats well. His appetite hasn’t returned to normal yet, and the culprit this time might be teething; he is cutting two molars at the same time : top right and bottom left ( he already has one bottom right molar). Maybe I can also blame teething (in addition to my own sickness on Sunday) for his renewed interest in nursing. Even when he is ready for his daytime nap now he comes up to me and grabs my shirt saying : Mama. The funny thing is that he never called me this name before, so I think he uses the word to refer to the breast, really funny.

Today I also noticed that he is saying something that sounds like : danguda, dagoda,  as if he was speaking Chinese. Later I figured out that he is  repeating a sentence he hears from me all the time : don’t go down. Also today I think he reached a very important mile stone. He was playing with the pots and pans and using their lids as a mirror. He usually looks to his image and says baby ( baba or babbi) – and I said to him : Yes, baby Robert.He responded by looking at me and pointing to himself; he understood the  reference, and could identify his name.

So this is all fine and well, my little boy is growing and his cognitive skills are developing, it is wonderful to be able to watch that every day..

While we are still on the subject of progress, I received a phone call from the furniture shop and my things are ready in the warehouse, and all I have to do is wait for them to be delivered (and pay the balance of course). I will close on this progressive note, and will talk more about setbacks some other time.

View all posts by marobbie